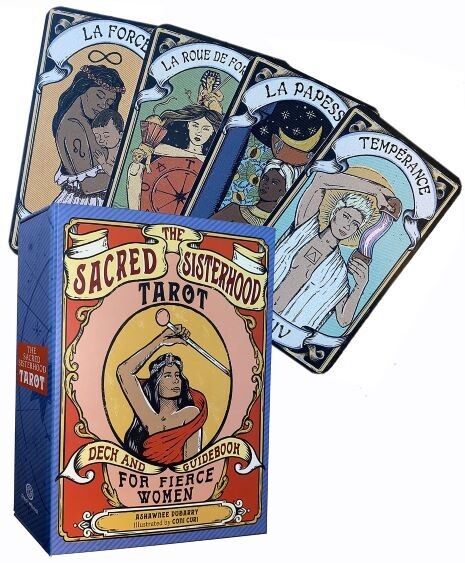 A tarot kit for the modern mystic, creatively reimagined with inclusive, female symbology and a vintage-poster aesthetic.
The Sacred Sisterhood Tarot is an invitation for all to tap into the energy of the Divine Feminine and reclaim the tarot as a tool for self-care, spiritual growth, and self-actualization. Tarot was created during a time when the patriarchy maintained tight control over the roles that women were allowed to assume, and as a result most decks overlook the rich religious and spiritual status women have held throughout history. The Sacred Sisterhood Tarot is a complete reimagining—it’s what happens when we open up every card in the deck to feminine energy. True sisterhood is about coming together in a sacred space to support one another—no matter how you identify.
In the accompanying guidebook, readers will learn about spreads, shuffling techniques, and cleansing practices. Detailed keywords and meanings are provided for all 78 cards whether they are upright or reversed. This tarot set is also an international collaboration between Ashawnee DuBarry, an intuitive tarot reader based in New Jersey, and Coni Curie, an Argentine artist. The cards themselves were created to resemble vintage posters with a modern edge and features the original French name for each of the Major Arcana, such as La Papesse for the High Priestess and Le Diable for the Devil. The number system and minor Arcana follows the traditional Rider-Waite-Smith convention.
Through the imagery, keywords, card meanings, and an exploration of female symbolism, readers will be instilled with confidence not only in their own feminine power but in a deeper understanding of a centuries-old craft.
Save this product for later
Display prices in: USD