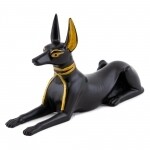 Anubis was not a god of the dead, in the sense that he was the ruler of the underworld, he was the god who supervised the embalming and burial of the deceased and who guided the dead in their journey into the afterlife. Once in the underworld, Anubis, assisted by the god Thot, supervises the the weight of "truth" by weighing the Heart of the dead against Goddess Ma'at, who was often depicted with an ostrich feather. This then dictated the fate of souls in the afterlife.

Anubis was usually portrayed as a half human, half jackal, or in full jackal form wearing a ribbon and holding a flail in the crook of its arm.